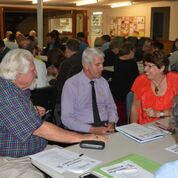 A growing list of candidates from all parties pledge to support community efforts around local and state-wide issues including the NDIS roll-out in Queensland, worker exploitation, quality aged care and vocational training. 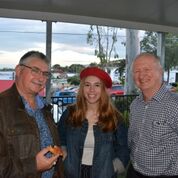 BRISBANE 22 Nov. 2017: The Queensland Community Alliance last night got the support of One Nation candidate for Logan, Mr Scott Bannan, as a growing list of candidates from all parties pledge to support community efforts around local and state-wide issues including the NDIS roll-out in Queensland, worker exploitation, quality aged care and vocational training.

The Alliance, a growing non-partisan coalition of the state’s largest faith groups, community and ethnic organisations and unions working together for the common good, has visited candidates in 15 electorates so far, and held three large community assemblies in Stafford, Springwood and Mount Gravatt in the lead up to the state election this Saturday, where candidates heard powerful stories of real hardship and were publicly asked to support the Alliance and work with them.

“So far all the candidates agreed to work with us and there were some powerful stories shared in our assemblies that will form the basis of our campaigns and actions post-election,” said Mr Roger Marshall, a community leader in Logan and Queensland Community Alliance Co-Chair.

"There’s a real passion from the members of our neighbourhood centres, unions, faith groups and community organisations to see our issues get the attention they deserve!” Mr Marshall said. “To make sure that they do, we believe that a new spirit of collaboration and partnership with civil society organisations like ourselves is needed.”

Close to 300 community leaders have been involved in engaging candidates during the election campaign. And candidates from the LNP, Labor, One Nation and the Greens have all attended assemblies

“The recognition we have received from all political parties and their commitments to work with us are an important step in our work for the common good,” Mr Marshall said.

In August the Premier, Annastacia Palaszczuk, acknowledged and agreed to work with the Alliance at its Founding Assembly at Brisbane City Hall in front of 1,425 people.

Opposition Leader Tim Nicholls did not attend, but yesterday promised in writing to work with the Alliance on our campaigns. Alliance leaders have also received similar promises from ALP, LNP, Greens and One Nation candidates in key south east Queensland seats.

This statewide commitment builds on remarkable local success including: public transport concessions for refugees, parking concessions for patients and families at RPH that then formed the policy for all of Brisbane, $3 million for new maternity hubs and Australia’s first ever demand-response transport trial in Logan.

Candidate meetings: 15 meetings held with LNP, ALP, Greens and One Nations candidates all over SE Qld.